The Campaign for Nuclear Disarmament's Conference and the iCAN Nobel Prize 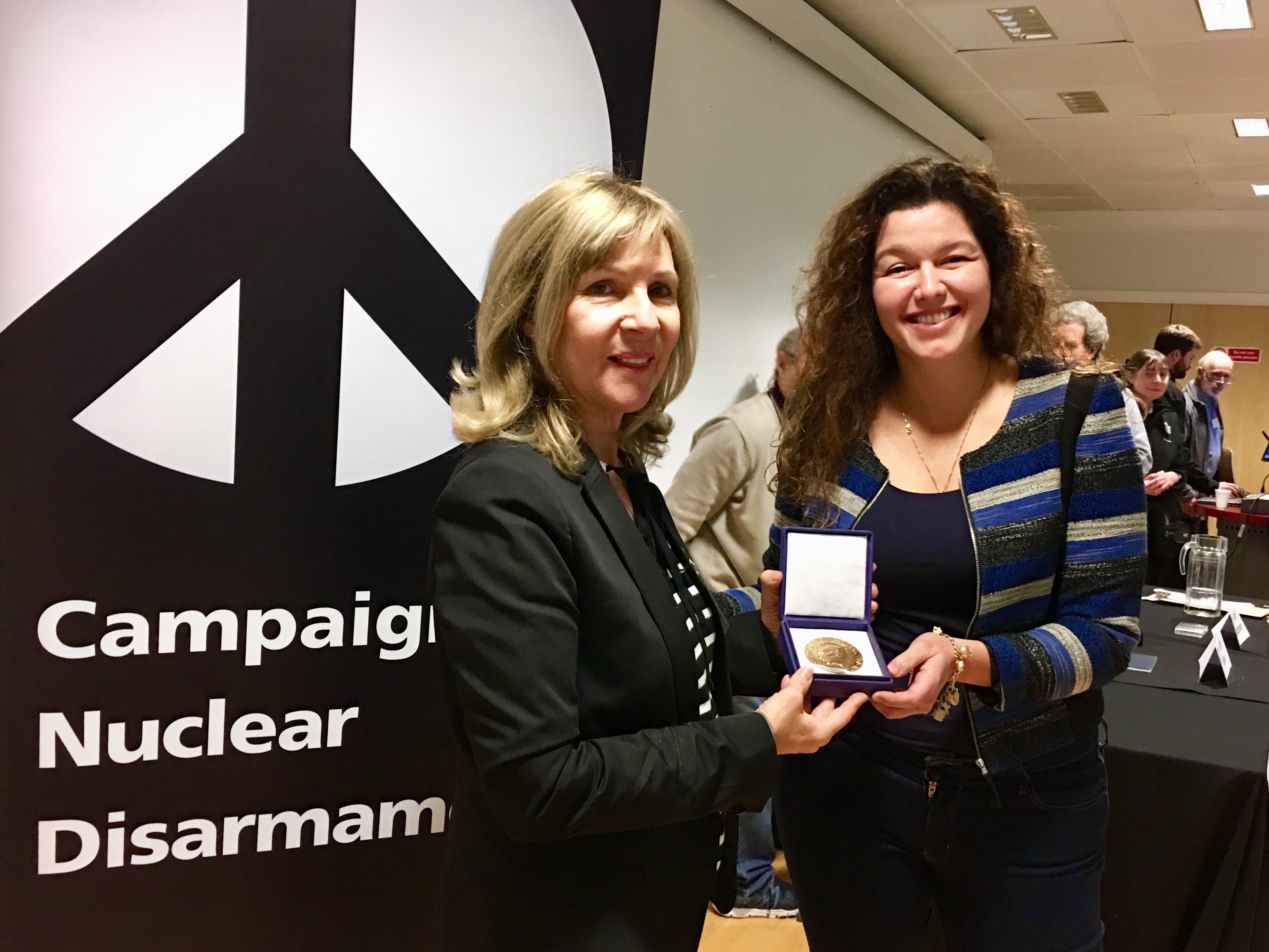 We gather on a cold Saturday morning, exchange a few jokes about the monsoon raging outside and go in search of a cup of tea and a biscuit. It’s all so British and normal.

But we aren’t here for fun. This isn’t your typical Saturday activity. We are all here to learn about the Future Of War.

As we gather in the sparsely occupied auditorium, I remember last year’s Campaign For Nuclear Disarmament conference. Last year the room was bigger and fuller, people were standing in the aisles, coats were piled up on the floor, the atmosphere was one of happy reunion and boisterous victory. This year, we are fewer, we are quieter.

Last year, ICAN had just won the Nobel Prize for banning nuclear weapons at the UN. Last year, Baby Boomers with long frizzy white ponytails came to share in the joy of their life’s accomplishments. Macramé cardigans and Birkenstocks, round metal pins with peace signs and hippie slogans graced the participants lapels. Last year we had hope.

This year, the mood is somber on the centenary of World War I. The Baby Boomers are still here. But today, they’re wearing suits and they’ve come to talk about the coming war. The ever-increasing military budgets. The worrisome rise of saber rattling and aggressive rhetoric among our leaders. Today, most of us are young. Professionals. Here a young teacher who specializes in Warfare. There a Programmer interested in Quantum Physics. A bit further, a student with piercings and a curly blond man-bun. The audience listens attentively and you could hear a pin drop.

The news is not good. Speakers apologize repeatedly for ruining the mood, for being the bearers of bad news. The Nobel Prize makes an appearance, brought by Arielle Denis from Geneva, it shines, in its blue box, the symbol of a global peace initiative that, for once, succeeded. But although we queue to have our picture taken with it, some of us are thinking: will it be enough to prevent the next war? Are we already at war? Have we entered an age of permanent war?

The Shape of Things to Come:

Ted Seay, an American tactical nuclear weapons expert who used to advise the US Mission to NATO starts us off: the Mutually Assured Destruction principle does not work anymore. Nuclear weapons are no longer a deterrent, if they ever were.

A recent study by the National Centre for Atmospheric research found that it would only take the explosion of one megaton to precipitate a nuclear winter. Black carbon particles would destroy the ozone layer. Crops and livestock would be annihilated and humans would starve. And the worse part is: it would only take a small-scale regional event to trigger it. Some call it a nuclear autumn because ‘only’ two billion people would die, he jokes sadly. If Super powers had a go, we’d be looking at an extinction level event.

Stuart Parkinson from Scientists for Global responsibility takes over and echoes Ted Seay’s warnings: the military-industrial complex is more dangerous than any single statesman. They profit from the build up of nuclear arsenals and the ratcheting up of conflicts all over the world. Capitalist logic means that they’ll keep convincing ministries of defense all over the world to spend higher and higher budgets on armament.

As and example, he shows us a graph. The Climate Crisis is reaching its paroxysm and measures to counteract global warming are becoming a necessity. But what are the US spending their budget on? $1.7 billion on Military R&D and $100 million on sustainable technologies R&D. The top of the graph, looks like a skyscraper, reaching far above the panel members’ heads. But the climate research budget sits so low at the bottom of the slide that no one can see it. We joke about moving the panelists to be able to see the small mound of money allocated to sustainable energy. But the levity is tinged with anxiety.

Steven Rose an eminent bio-chemist professor takes the microphone. There is a hospital bandage on the back of his hand that speaks of serious procedures. He has a hospital appointment immediately after but still made a point to attend. This feels all too important. We all have a duty to be here, to share information, to raise the alarm.

But that’s not all, he says, DARPA has an extreme interest in cognitive and social neuroscience. They are researching manipulation and interrogation techniques, weapons that will disorient soldiers and incapacitate them.

Indeed, the human toll of war is very high. From soldier casualties to refugees displaced by wars, the numbers hang in the air, unimaginably large: 68 million people are currently fleeing their homes because of conflict, Jean Lambert tells us, a record high.

The Militarisation of Space

Bruce Gagnon, coordinator of the Global Network against Weapons & Nuclear Power in Space opens up the perspective to yet another threat to our global survival: the militarization of space. Grandiose schemes, which up to now, were the realm of James Bond villains, take on a sinister hue. It seems it is possible to aim a laser beam at a target from space or to let loose tungsten rods from a satellite onto earth.

Ignore this “pyramid to the heavens” at your own peril, he tells us. All European armament built under the NATO umbrella has to be inter-operable with US technology. The result, he says, is that all European firepower is effectively at the disposal of the US military, who will choose the targets.

Patrice Salzenstein a French pacifist adds a layer of concern. The 1967 Outer Space Treaty prohibited the installation and use of Weapons of Mass Destruction in Space. But it looks like that treaty is increasingly being undermined. In particular, he warns that France may be on the verge of violating the treaty, in a bid to defend against Russian interference. France has over 300 nuclear weapons but although 67% of its citizens want to ratify the UN nuclear ban treaty, he predicts France will not do it, as practically all its energy comes from nuclear power plants. Nuclear weapons in space may be looming.

Armed Robots and drones on the battlefield

Our minds dazzled by the array of future weapons, we dive in to the afternoon’s workshops.

Pere Brunet tries to explain to us how military AI weaponry works but he worries: we know what goes in (vast amounts of data) and we can see that the output is more or less correct. We just have no real understanding of the machine-learning black box in the middle. The problems surrounding those AI weapons abound, in fact they have a guaranteed probability of failure despite the fact that they are error-sensitive applications. In other words, if Google fudges your translation, you can apply human post-supervision and discard the result. At the moment, human input is still required for driving weapons and for targeting/heuristic weapons but for how long?

Peter Burt wishes he had better news, he just wrote Off The Leash, a report on automated weapons. Bouncing off Pere’s presentation, he adds: drones will now carry their own computers on board and they will choose their own targets with no human input required or possible. There will be no red button.

Cyber warfare is what worries him the most though. With the advent of quantum computing, it seems that algorithms and encryptions have become hackable. An automatic sniper rifle can be hacked and made to kill an unintended target. So the combination of AI automation and cyber warfare, could mean we are increasingly reliant on weapons that can be hacked and turned against our own on the field of battle.

Machine learning, big data and weapons are being combined as we speak in projects such as MAVEN. Pere doesn’t think anything can be done to stop the march of autonomy. Our governments push it through, as it means lower casualties and therefore less pressure to end wars, which in turns allows them to wage permanent warfare and maintain our societies in a state of forever-war.

But in Peter’s view, even though these technologies are on our doorsteps, we can resist. He reminds us that Google employees refused to work on MAVEN and pressured their management into withdrawing from the military project. AI is just a new tool, he argues, like a hammer, and we citizens have to make sure that our states are held accountable on how they use these tools. The price of liberty is eternal vigilance, he concludes.

Elke Schwartz echoes Peter’s call: Resistance is not futile. The Lecturer and Author of Death Machines: The ethics of violent technologies doesn’t study how we shape AI but rather how AI shapes us. And her vision is chilling.

Automated warfare makes us more violent and less ethical. Violence has become a math problem and the moral question of “whether or not to kill” has been replaced with the technical problem of “How best to kill more efficiently.” Moral blind spots are being created by our faith in the superhuman decision powers of AI.

But the important things in life are not quantifiable. We don’t need more data points, she says, these are moral, political, social issues. No company that deals in Death and Health should ever be publicly traded because it becomes within their interest to put capitalistic considerations ahead of human life.

Amid the gloomy predictions, a seed of hope is planted; there are people like these speakers who dedicate their lives to standing guard and blowing the whistle. There are people like us, who are bearing witness and spreading the word. Perhaps humanity has survived this long and can survive still. Maybe we can silence the ever-closer drums of war.

I hear their beat in the creation of new European Army.

I hear their morbid rhythm in the fevered tweeting of nuclear statesmen.

I hear their rattle in the INF’s death throes.

I adjust the red poppy on my lapel, as I put on my coat and glance at the white poppy the other attendees are wearing. Let the millions of dead from two world wars past bring us all to our senses, I whisper to the night, as a third world war looms closer and closer, hiding in the shadows of the rain-slick streets as I hurry home.